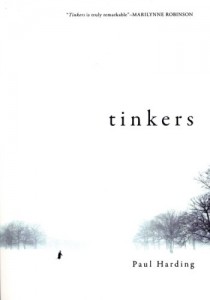 I think I picked up this book because it reminded me of Einstein’s Dreams (which reminds me I should re-read that). The physical nature of the book is quite similar. Well that and fact that my Dad was a tinkerer.

An old man is dying. He is in bed (surrounded by his family) and his life floats through his mind. That dying man is George Washington Crosby.

There are many story lines but favorite is George’s father Howard. Howard isn’t successful in the monetarily sense but he has the heart of a poet. Howard also suffers from epilepsy and both his wife and son hold it against him. This burden weighs heavily on his mind, in his life. You can feel the sadness and desperation.

“His face was pale. It no longer showed expression. True, it showed a kind of peace, or, more precisely, seemed to predict that peace, but such a peace was not a human one.”

If you read this book please let me know.