I tried to pretend I was indifferent.  And I may have actually convinced myself that I would not be bothered by a missed NFL season.  I felt taken for granted, and even rejected, as it was clear what I wanted was immaterial.  It was obvious to me what the other parties would gain if they resolved their differences, but what would I gain?  I was ready to move forward, and not look back.  But then I heard the news, that the NFL would play football this year, and not only that, they wanted me back.  Robert Kraft even said so………but should I take a chance, or would I just be making the same mistake again?

I would have missed much, I realize.  Fantasy drafts with my friends are great nights out, filled with beer, and spreadsheets, and newly minted insults that I never would have learned if they hadn’t been directed at me by that friend I’ve known since we were on the same little league team.  Arguably, fantasy football is the best vehicle I have for maintaining some of my oldest friendships.  I would have missed Sundays filled with pregame analysis, chili on the stove, and all the necessary distractions needed to forget that the next day is Monday.  I would have missed gloating when the Jets were crushed by my Patriots, and I would have missed looking for a good hiding place at work when the reverse happened.  The speculation, the analysis, the commiserating, the celebrating……..so much of being a fan is about connecting with others, and participating in a shared experience that is so emotionally charged it is hard to forget. But…….

The NFL was ready to forget me.  It sort of felt like college, when you met that gorgeous girl in the cafeteria, and everything seemed so easy, and perfect.  Each day, everything just got better, until she took a step back.  “I have to figure a few things out.” she said.  And it hurt, but pride triggered all the familiar defense mechanisms, and suddenly you’re convinced you’re ready to move on.  You call that girl from back home, and arrange to get together.  You even start to forget you ever met that girl in the cafeteria.  But then, all of sudden, and almost unexpectedly, she’s standing right there in front of you.  And she is still gorgeous, and wants you back.  Billy Joel’s “Just the Way You Are” is playing and it all becomes clear…….you were fooling yourself.  The two of you were clearly meant for each other.  The relationship isn’t optional, it is destiny.

I’m amazed at how, just two days after the union agreed to the new contract, how immersed I am once again in all the minutiae of the NFL.   The cuts, rookie free agent signings, salary caps, the trades……I’m even checking sports blogs to see what kind of shape the players are in as they return to their facilities.  In other words, all is forgiven.  Me and the NFL, we can look forward to 10 happy years together.  And I’ve remembered something I seemed willing to forget……I <3 the NFL. 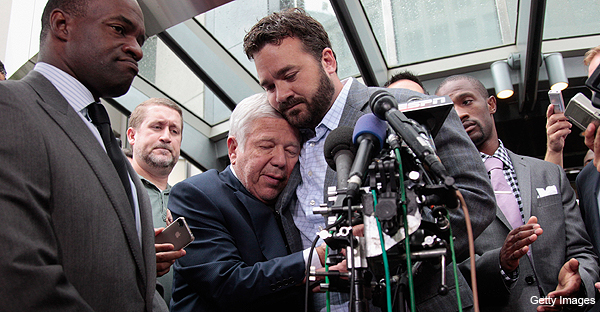