So I let the Sox/Yanks series creep up on me.  I inadvertently avoided all the hype, although that is probably best.  And last night, after a long suburban parent Saturday, I opened a Racer 5 IPA and sat down to watch the vaunted Yankee lineup face a rejuvenated Josh Beckett.

But the Yanks were without their DH.  Apparently, after being told he was batting ninth in the lineup, Jorge refused to play.  He is batting .165.

Now, aging out of the sport you love is difficult.  It hurts a man’s pride.  I get that.  In fact, I remember the day my baseball career ended.  I said to my coach “Look, you can take your $13 million dollars you are paying me this year, and you can stick it!  I refuse to suffer the indignity of watching better players take on a larger role in an effort to help my team win.  What about me, you @$%#%&@^!”

The Yankee problems are bigger than Jorge.  They are 3-8 in their last 11, have dropped out of first, don’t have a single starter with an average above .300, and are leaning waaaaay too heavily on Bartolo Colon.  But Jorge is emblematic of a larger problem.  The Yankees are looking like a collection of veteran players on the downside of their careers, who seemingly wish to be treated as though they were in their prime.  I would rejoice at their misfortune, but can’t forget about their deep reserves and ability to make innumerable moves prior to the trade deadline.  Still…….I like what I see.

Jorge should shut up and do what he is told, given his salary, which was a gift from the organization.  But I can understand getting angry.  However, I fear that my dream of discord and friction will end by tonight.  Jorge is dedicated to his franchise, and Girardi isn’t an idiot, so they’ll find a path forward.  By the end of this day, I’m sure this mini-controversy will be in the rear view mirror.   But, if you’re a Yankee hater like me, you can always hope that by August, the Yankees as a team will also be in the rear view mirror! 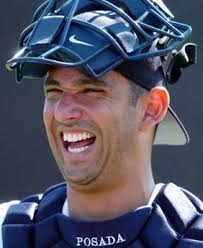